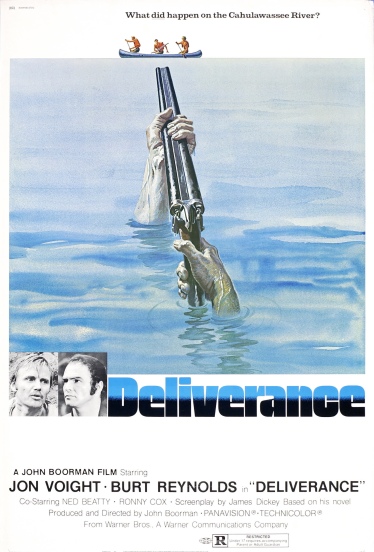 Based on a book by James Dickey, this is a film that’s earned it’s R rating. It’s oddly beautiful at times, and also very dark. So just be prepared going in.

Four friends set off on a river rafting trip together, to enjoy and explore a forested area before it’s destroyed to make a dam. The four are all suburban types who fancy themselves as able to rough it in the woods, when they realise that they’ve bitten off far more than they can chew. They fall afoul of local inbred rednecks, who kidnap them and rape one of them. Though they manage to kill one of their attackers, they still have to get out of the area alive, with one of their enemies stalking them with a rifle.

Intense, right? Perhaps we’re more sensitised to this kind of violence, but this film was really shocking and ground breaking in the 70’s, and I think it still retains that shock today. It’s not a film about sensationalising violence, but more about how the average guy might see himself as being tough, until faced with the sexualised violence that is there, ignored, but in his own backyard. Perhaps it’s about over confidence, if you want to look at it that way, but the way that the men have to become violent to survive feels like a degeneration, rather than some kind of revenge or victory. In the end, the four decide to keep the events of the trip a secret, but at what emotional cost?

It’s an interesting look at the way in which we live, I think. The fact that we can be so confident in our own sphere, and be so unaware of the dangers near us. Our naivety, and also our ability to lose our own humanity very quickly in the face of things that we never thought to be exposed to. But that’s just one interpretation. Any way you look at it, it’s a journey into the heart of darkness, as 1001 Movies puts it.

And of course, it has those famous duelling banjos.

See It If: you like your films to be a little untraditional. It’s a film about man, as opposed to stereotypes of masculinity, and it’s also quite powerful.