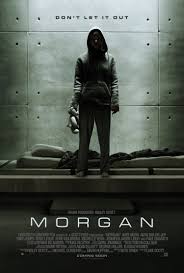 One of the most forgettable films of the year, this is the story of a girl called Morgan, a genetically engineered person whose case comes under investigation by the company that funded her creation after she turns violently on her handler.

There have been many sci fi films about women created as weaponry that might or might not be human. Ex Machina explored this most recently, to great effect. This film does nothing new or exciting with the genre, and feels highly derivative. What startles the most the the crazy internal logic. Morgan (Taylor-Joy) is a fairly awkward character, and it feels odd that her creators have thrown all sense of scientific integrity out the window and love her like a family member, which is a central problem. The devotion to her feels unrealistic.

So much of this film is just events and emotion dropped in to create drama rather than rising out of the characters motivations. Paul Giamatti as a psych evaluator stands out as a fine example: he is asked to evaluate her through glass, at which point he says that if he can’t be safe in the same room as her, she’s already failed the evaluation. At this point, Morgan should just be terminated, and the film end. Instead, he’s allowed into the room, and he behaves in a baiting manner, trying to get her to react, which seems like nothing a psychologist would do. When she attacks, there’s no real protocol to deal with it. Surely a secure facility would have some kind of system to disable her should she attack.

It’s all rather silly and dull. The “twist” ending you’ll guess in the first scene. But the inevitable fight sequences are choreographed well, and the film is shot nicely. If you can manage to sit through the grating and illogical behavior of the characters, that’s  your meager reward.

See It If: you really like weaponised humanity narratives, otherwise, skip it.