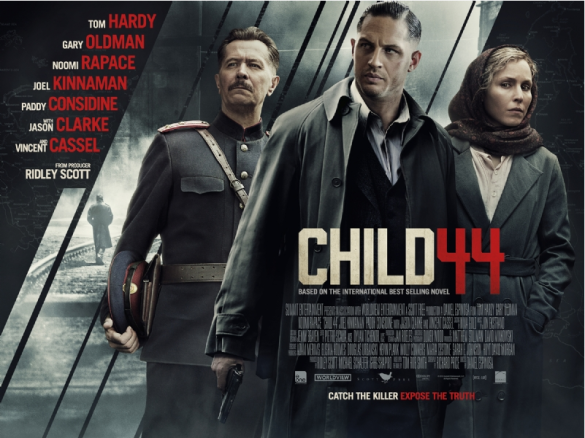 Based on a popular novel by Tom Rob Smith, the drama in this films comes from the concept prevalent in Soviet Russia under Stalin that since the political revolution created a perfect society, there could not possibly be any such thing as crime.

When a series of child murders start to occur, the cover up must be complete, or they would give the lie to this idea on which the very fabric of society was based. But one of the children found killed, the 44th victim, is the god child of an idealistic young officer and war hero, Demidov (Hardy).

Over the course of time, Demidov has managed to catch the jealous gaze of Vasili (Kinnaman), who covets his life and position. Demidov soon finds his wife accused of political crimes, and when they are banished from the capital in disgrace, barely escaping much worse punishment, Demidov’s life really starts to unravel, but the mystery of who is killing children is just beginning.

Between political intrigue and chilling serial child murder, the film is carried by the brilliant performances of Hardy and his wife, played by Noomi Rapace. Their marriage is a complex one, and grows over the course of the film, which is really nice and gives the film an emotional core that makes this film much more engrossing than it otherwise could be. Whilst she is both terrified and strong, and he is unassailable, idealistic and yet very vulnerable. The over arching themes of political corruption and tight control are frankly terrifying.

The film has flaws (it’s saccharine sweet ending, for example), but over all, it’s a functional thriller, with excellent performances and enough twists and set pieces to keep you guessing.

See It If: you’re looking for an entertaining, political thriller. So many modern thrillers disappoint, but this one mostly delivers.