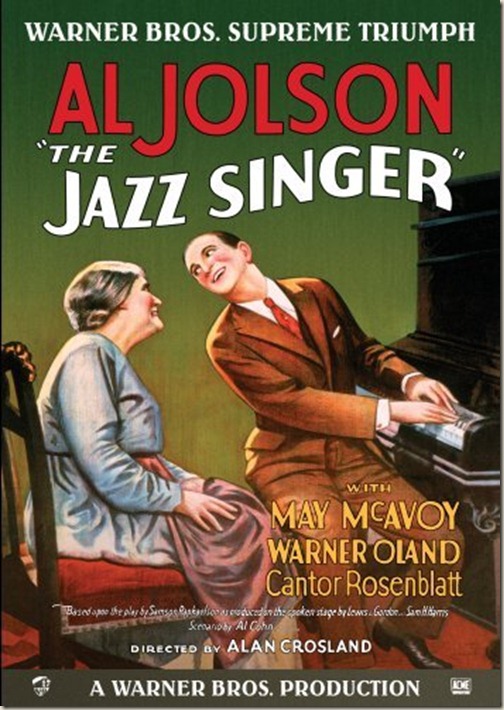 Jakie (Jolson) the son of  Jewish Cantor, finds himself cast out of his family when he has to choose between following his fathers footsteps or his love of jazz music and his desire to perform. Whilst he slowly finds fame, his dream of being reunited with his family seems to become more and more unlikely.

Exploring themes that would become predominant in later American cinema, the drive to be true to yourself and find your way, versus the dominance of family and tradition are explored here.

Why Is It A Must See: A triumph by Warner Brothers, and starring the famous Al Jolson, this film is considered the first sound film, the one that broke with silent cinema and made movies something new. Although it is a “talkie”, the recorded sound is foley (sound effects) and the songs performed by Jolson. The story and dialogue itself still uses cards that have to be read.

Whilst the film is considered important for this reason, and also for the way in which it looks at the Jewish community’s changing relationship with America, the old vs new generation, immigration and race, one thing that cannot be overlooked is the use of black face by Al Jolson. He dresses up as “comical” portrayal of a black man, with his face painted black and huge lips and eyes painted in. He was quite a popular act in this way in the 20’s, and clearly his act is quite racist. I certainly find it grotesque. So please don’t view my inclusion of it in this list as any way approving of this kind of thing.

See It If: I think this one is for those of you who love the history of film or who are interested in how race and minorities have been portrayed in film historically. If you want to see the transition of silent film to sound, this is it.