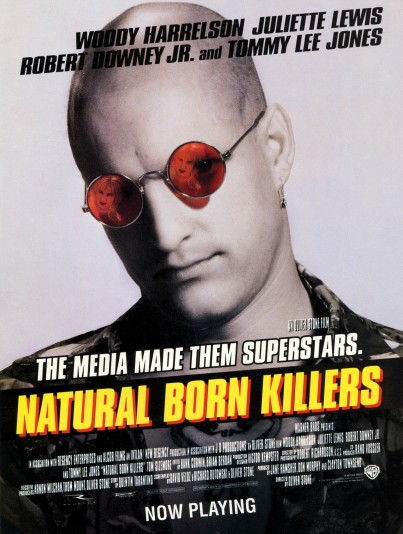 This slick and stylish film was based on a story by Tarantino and was quite controversial on it’s release, though the MTV generation related to it.

It’s the story of a couple who go on a murder spree across America, and capture the popular imagination of the public, whilst being chased by a man determined to stop them at any cost. Whilst the good guys in this film are murderers, the bad guys are corrupt and have their own twisted agendas too.

Why Is It A Must See: Oliver Stones film is a strong commentary on the way that violence is idolised through television representation and movies, such that young people can’t tell the difference between reality and fantasy, and have no sense of conscience.

Shot a lot like a music video, with different styles and colours and popular music: black and white juxtaposed with colour, news journalism against animated sequences, sad tales told as though they are sit coms, the lovers believing they’re like Romeo and Juliet. The film is quite unusual and makes some seriously creative moves.

Perhaps based on real life serial killer couples, and the way that American teens in the 90’s were fascinated by them (and the way that people are still fascinated now), the film is amusing in that whilst it’s condemning and lampooning the way that we love violence, it makes for a very entertaining film, does that then undermine Stone’s message? Or make it more pertinent?

See It If: you love the 90’s MTV generation, or if you like slick violent films. It’s quite engrossing and unusual.