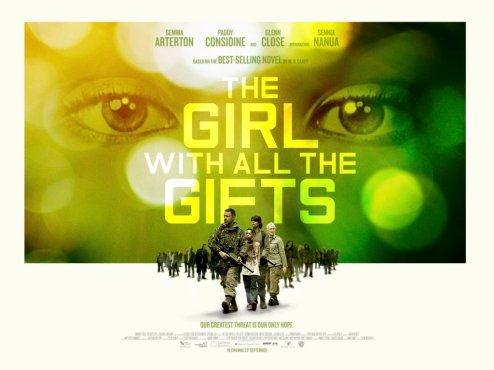 This film has a rating of 7.3 on IMDB and many of my friends who attended previews of this film loved it.

But why? It’s a terrible film.

It follows the story of a girl who has grown up in a facility with other children like her, and while she knows that everyone is afraid of her, that a monster lurks inside her, she hasn’t yet pieced it all together. But when things change, and the facility is overrun by zombies, she learns that she’s half human, half zombie, and that the world is ending. With a ragtag bunch, including the teacher from the facility who is the only person who has ever shown her any kindness, she starts to learn about the world outside and to question everything.

I normally love dystopian futures or zombie narratives, but in this film, everyone is constantly doing stupid things, and it feels like the plot directs characters to set situations, and the logic never holds up. Trying to sneak past zombies quietly? Talking to each other and stomping won’t wake them, firing off rounds won’t wake them, so why the need to sneak? Having a character wonder why the zombies group together and then later explaining what happens when they do group, which means she already knew the answer… I mean, there’s so many holes in the logic of this film. And then there are all the stupid things that the characters do, … It’s so contrived. How have these people survived the indeterminate amount of time since the killer virus broke out if they’re this stupid, ill prepared…

And the performances. The little girl is annoying. And she’s the main character. She’s ok, but nothing to write home about. Everyone else feels most of the time like they’re phoning it in, and the characters don’t stay true to any one sense of themselves. They’re all rather bland, and all rather stupid. And what’s with their costume design? They’re all in baggy clothes. Surely that kind of clothing would be a danger in combat or lab situations.

Known for his work on TV series Peaky Blinders and Sherlock, director McCarthy has made what amounts to me as just another zombie film, and not a very good one at that. I guessed the ending about a third of the way in, and for those of you who read or saw I Am Legend, this feels really derivative and dull.

See It If: I didn’t enjoy this film at all, I can’t recommend you see it. But it has a high rating on IMDB, so there must be loads of you out there who loved it.