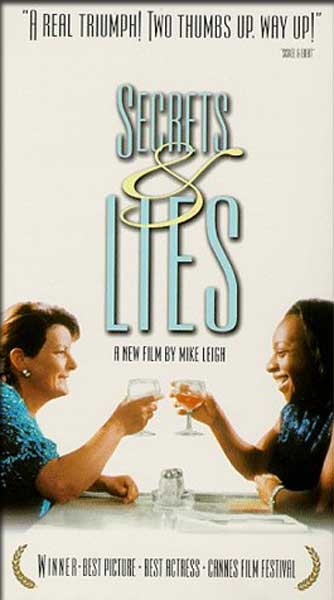 A movie about class and race relations in Britain, this film is from acclaimed director Mike Leigh. It follows the story of two women, a successful black woman who is in search of her biological mother, and the woman who gave birth to her, a lower class white woman with problems.

Cynthia (Blethyn) is shocked that the daughter that she has kept secret is black, just as Hortense is surprised that her mother is white. There is a bit of humour in that, and in the secrets that the entire family are keeping. Cynthia’s brother (Spall) knows that the secret of the adopted child, but Cynthia’s daughter doesn’t, he’s keeping the secret that he and his wife are barren. Everyone has something to hide. But with Cynthia’s growing relationship with Hortense, it all threatens to emerge.

It’s a must see because: The film has a free, natural feeling, exploring the characters and how they relate without falling into melodrama. The film excels in it’s scenes of the mother and lost daughter bonding, and Cynthia finding her confidence a bit. The way that the film is about ordinary people and ordinary lives, without the gloss, has a freshness to it. The problem for me is Cynthia. She’s emotionally unstable, clinging, patheric and whiney, even though she’s played brilliantly by Blethyn, I just couldn’t relate. The reasoning is that she’s had a hard life, but she’s often mean and manipulative. I just found her and the whole thing a bit grotesque.

I also felt that although Hortense’s family and friendships are explored at first, in the second half of the film, once she meets Cynthia, they are absent. I would have liked to know how her family and friends felt about it all.