In this horror round up, we have haunted houses, government psychic investigation, empty buildings with something creeping in the basement, and plenty of people who should not go in there! (But do anyway)

Probably my favourite on the list, this involves a recently bereaved, middle aged couple moving into a house in a small town where something lurks in the basement. They are warned by a neighbour that “the house needs a family” and when a hippy couple join them for a séance and their creepy neighbour seems to know more about what’s going on at the house than seems natural, it all kicks off. It’s shot really well, with beautiful vistas and the snowy climate adding to the feeling of isolation, whilst it’s 70’s costuming is a sartorial delight. Good creepy scares and a solid, though not entirely original tale. 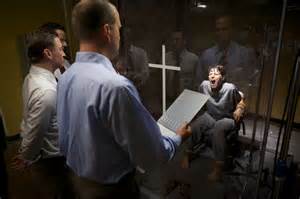 A bit like an extended episode of The X Files, this movie functions like a documentary, telling the story of the case that closed down the secret government facility that investigated the paranormal. When a woman with strange powers is sent by her sister to the facility, the institute thinks they’ve found proof of psychic abilities, but they soon realise when her family don’t want her back that there is something far more terrifying going on, a case of demonic possession. It’s interesting, and the possession is done really well, but found footage/documentary horrors tend to lack immediacy with lessens the tension, and it doesn’t really break new ground. Not a bad horror though. 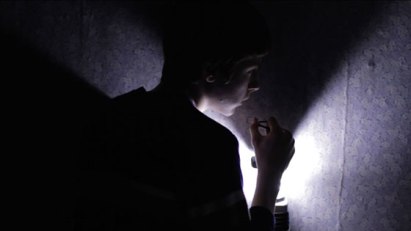 A teenage boy is taken to live on an abandoned council estate by his father. Though the place is empty, the boy soon hears noises coming from the boarded up flat next door, and he enlists the help of a local girl be befriends in investigating. But there is something not  human in the flat next door, and his own father knows something about it. And why is his father lying about where his mother is? It’s a great premise for a film, and the location is truly creepy. However, the boy’s complete lack of acting ability means that his facial expression is the same no matter what is happening. The twist ending is also a bit flat. But otherwise a good British horror.

A woman recovering from a period of psychotic episodes has to prove that she can be responsible or she will lose custody of her daughter, but her new job as a security guard in an huge empty building tests her sanity when she starts hearing things on the other side of  padlocked door in the basement. With solid performances from the three main characters, and the beautiful building with it’s long halls and vaulted ceilings being a perfect location for a scary film, it’s not a bad movie. But her odd co-worker being by turns aggressive and then overly sexual is handled badly, and is completely strange in light of the ending. It kind of works, but much of the actors behaviour and actions are written to propel the plot rather than make any kind of sense, which kind of ruins it a bit. Good fun though.

In this documentary/found-footage style horror, an RV full of hapless 20 somethings set out to record the haunted house attractions set up in the month of October for Hallowe’en. They manage to fall foul of the odd workers in the attractions and find themselves stalked by odd clowns and carny workers as they go further and further to find the ultimate scary experience that they’ve heard rumours about. It’s fairly dull fare, with some fun jump scares, but since all the members of the team are pretty awful (secretly filming themselves have sex, leaving their lone female team member alone in a strange bar where she almost gets assaulted, etc) the tension is not very high.What’s really scary is that their behaviour might be considered normal or acceptable.