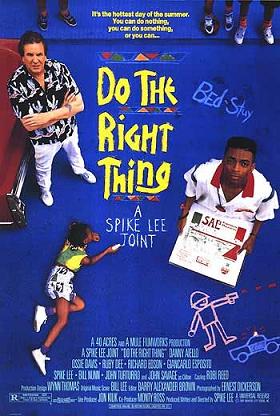 One summer in Brooklyn, as the temperature rises racial tensions flare, centring on a Italian owned pizza shop in a black neighbourhood.

Mookie, played by the director Spike Lee, is the main character in a large cast that show many different personality types in the neighbourhood. He lives with his sister Jade (Joie Lee), who supports him. He has a girlfriend (Perez) and child who he doesn’t see enough. And he works as a delivery driver at a pizza parlour (he walks the pizzas to their destinations), which is a local institution. The restaurant is owned by Sal (Aiello) who has watched everyone in the neighbourhood grow up or grow old, and he is aided by his two sons, one of whom hates the local black population (Pino played by Turturro) and the other who feels very comfortable amongst them.

Racial tensions are discussed by characters around the neighbourhood, but flare at the restaurant with tragic consequences as a local youth tries to talk everyone into boycotting it for not having black faces represented on the photo wall.

It’s a must see because: a vibrant and angry film, it was controversial on it’s release and apparently caused fears that it would incite riots. It has a lot to say, with it’s reference to everyday life in Brooklyn representing a macrocosm; the circumstances of life there, the attitudes to race, the way people choose to live as well as the choices they don’t have. It has a lot of references to Martin Luther King and Malcolm X, men who had two very different ideas about the path to racial equality and the place of violence in that struggle, suggesting the dichotomy of opinions in the film follow similar lines and that the struggle is still very real.

See It If: You like your films raw, edgy, funny and political. It’s an powerful and emotional picture.