You’re logged into a database. You’re given access to some short clips of police interviews with a woman. You start to piece together that someone has gone missing. But who is she and why is she being questioned?

The game is called Her Story, a creation of Sam Barlow, a game designer who worked on Silent Hill games at Climax Studios before going independent. I thought I’d introduce you all to it here because this game is like a film, and shows how the lines are blurring in the game and movies worlds. Blurring in some fun and exciting ways.

There are quite a few game to movie adaptations out there, with varying levels of success, but they are generally considered to be poor prospects for entertainment. For those who played the game, they’re poor substitutes, and for the uninitiated viewer, they’re often incomprehensible or substitute action for any form of plot. There are exceptions to this rule, of course. But games will always be a tempting prospect for studios, who are eager to have franchise material which they can sell to people who already love the intellectual property. (With World Of Warcraft and Assassin’s Creed films coming out in the near future as two examples of where things are headed)

But what we’re looking at in Her Story is more like the opposite: it’s films influencing game format creation. Or a game that’s almost a film.

Whilst you’re initiated into the game via a police database, the actual plot is captured on film with Viva Seifert playing the sole character of Hannah Smith. You have to piece the plot together from searching with key words that you hear in the short clips. One thing leads to several possible others. At first, all you know is that Hannah has come in to report that her partner is missing. But the clips span a great deal of time, and there’s so much more going on in this story than just a missing persons case. 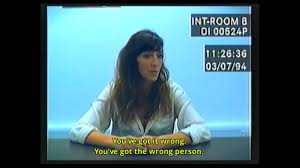 The game is a mystery that you solve like a puzzle, and the variety of pathways that a player can take to get to the conclusion make it very interesting. But the ending is also not too clear cut, leading to a lot of debate on online forums.

Essentially though, the game can be played in one night, much like a movie. And you’re watching filmed segments. It’s kind of like a film, but you have to put it together. It’s an interesting choice, and one that shows how films and gaming are blurring in ways that are beneficial to excellent story telling.

Something to watch out for.

(I played Her Story on Steam, so if you’re interested you should be able to find it there or for more details click here)