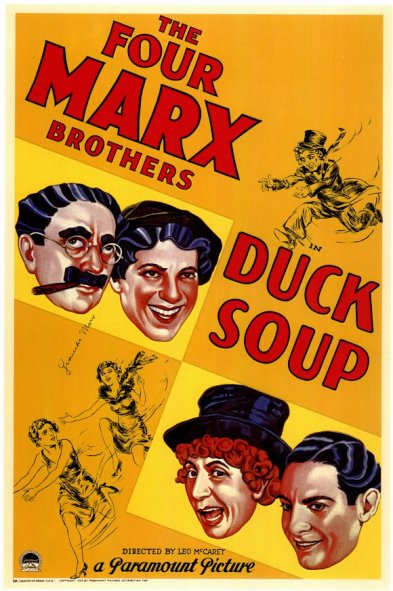 In the fictional country of Freedonia, a political coup takes places when a new, incompetent ruler is elected. Hilarity ensues.

Quite a short film, really, at only just over an hour, this film attempts to lampoon the politics of the day with it’s satire on leaders who are incompetent and corrupt, and willing to send their subjects to war over personal insults.

It’s kind of an odd film to watch. I remember watching Marx brothers movies when I was really young on a Sunday afternoon. I always liked the snappy dialogue, and Duck Soup has some really great one liners. But I think slapstick is a little lost on me, as an adult, though i can appreciate the incredible good timing the brothers have. And I think because these guys were so innovative, they were much copied later by other comedians, which means some of the jokes don’t feel original, even though this is where they were copied from. It’s a funny film, with slapstick, amusing songs, flirtations, political machinations, sarcasm, and some really gorgeous dresses.

One thing that really stood out for me was how creepy Harpo, the silent Marx brother, is. Oh my God… I think times have changed a lot, so you have to bear that in mind, of course. But there’s something about his face that’s so mobile, clownish, the way he moves and is always cutting things up with scissors, and the fact that he has this way with women that’s beyond awkward. It’s funny when he seems to fall for a secretary, though he stands really close to her and advances on her in a weird way, but later on there’s a scene where he breaks down a girls door and advances on her because he happened to spy her in her underwear through a window. I’m sure this was meant to be cute or funny at the time, and it kind of still is, since the girl doens’t seem to mind, but… it just has this weirdness about it.

Why This Film? The Marx brothers were a big deal in their day, and were the forefathers of much comedy that came later, both in cinema and TV. This film is considered their great masterpiece, and was the last time that straight-man Zeppo appeared with them. Interestingly, on it’s release it was greatly misunderstood, because of it’s cynicism about war and politics during the time of the Great Depression and following on the heels of WW1, but was revived by college kids in the 1960’s.

See It If: It should please fans of slapstick and classic comedy, as well as those who like rapid fire dialogue.