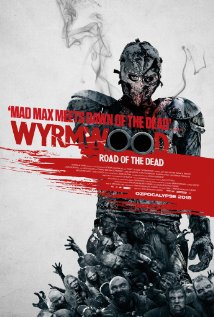 When a zombie apocalypse breaks out in the middle of the night, Barry’s life is destroyed and he embarks on a mission to find his remaining family member, his sister. However, things are also not going well for Brooke.

Ok, I take back some of what I said about Netflix being shit the other day, because of this film.

It has that Australian humour that is so … down to earth and understated. If you’ve seen Chopper, you’ll know what I mean. Zombie films are, by nature, very dark, but their tropes are also so well-known to us that you can’t really take them seriously, and they’re the kind of stories that you’re not meant to take too seriously either. The humour here really works, and cuts into the awfulness of what’s going on in this Outback apocalypse. Everyone at my house has now suddenly developed an Australian accent, that’s how much they like it. Very amused.

This film is surprising though, in that it plays with your expectations. Here, zombie survivors all have the same blood type, and the infection is airborne. There are some shady types doing experiments on zombies and people, with poor Brooke becoming a captive lab rat, developing an interesting power as a result. Zombie blood is flammable, which makes them a useful form of fuel. The deaths of the characters are brilliantly “Game of Thrones-esque”: deaths come unexpectedly and you never know who might be next. It really plays with the genre and makes it a little bit more than just another genre piece.

Like a lot of Australian films, the landscape is so important in creating the sensation and feel of the whole film, hanging threateningly over it all. Whilst there is some time spent inside, as characters take shelter, (usually in a garage, funnily enough) most of the story takes place in a vehicle, road trip style, through the bush or forest. You never see any towns or very many buildings at all. It adds to the wildness of the film, this being on a frontier, fighting for survival. If spending time in a car during an apocalypse sounds like another famous Australian film, you can bet that there is an homage to Mad Max, seen in some of the chase scenes, and most obviously in the design of the vehicle that the characters customise and armour to survive the roads. The film looks really good.

With gore aplenty, this film should please any zombie or horror fans, and the humour and pace, along with the set pieces make this film highly watchable. It keeps you guessing, with plot twists and new concepts that raise the bar for the genre, and the ending suggests there’s just enough unanswered questions that the creators are hoping for a sequel.

See it if: You like horror movies or if you appreciate Australian laconic humour.