An accident during a freak storm on Mars leaves one astronaut left behind, presumed dead. This astronaut, Mark Watney, must find a way to survive and make contact or die on Mars.

I think this is one of the best films of the year.

It basically works so well because of the central performance: Matt Damon as Mark Watney, the stranded botanist on Mars. He invests the character with a strong likability and sense of humour, which makes us want to see him succeed and survive, his character is such an optimist. But the odds are not in his favour, and when disasters strike, it’s like a punch in the stomach.

However, this film is not just focused on one man in isolation, and the guys on the ground at NASA and his team members on their way home with their struggles to come to terms with the loss and to find ways to rescue Watney are also excellent and keep the plot moving. This isn’t another Castaway or All Is Lost. 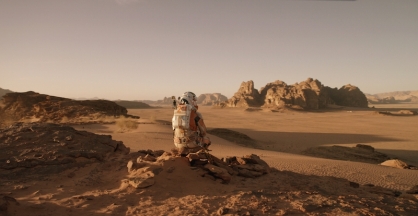 My only two criticisms are that it’s slightly long, though I think a lot of people won’t mind that, and that whilst all the astronauts get in touch with their family at some point, Mark Watney never does, the film only mentioning his parents almost in passing.

Go see this film, it’s beautiful, the landscapes and space is beautiful, and the film itself is funny, heartbreaking and tear jerking in all the right places.