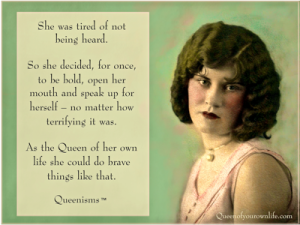 One of the girls I work with said something this week that’s kind of been on my mind. She doesn’t see herself as a writer, because the words on paper just don’t flow for her. They don’t come out easily and in ways that make her feel confident about sharing them. It was a funny thing  to hear in a way, because she is one of my favourite people and I always like to hear what she has to say. She’s much smarter than she realises, isn’t afraid to laugh at herself and possesses the natural quality of being herself unabashedly and saying what she thinks or feels. She is also much more sweet and caring than her tough exterior might have you think. I work with a few incredible human beings on a daily basis that have no idea how special they are.

Anyway, the reason I bring this up is because it made me think about finding your own voice. People around me in my current life have only just started to figure out that I write and have a creative life. I don’t hide it from people, but I also don’t confront people with it everyday either. I have some idea about why I do this, but I do think that the reasons I tell myself are not the ones that are the deeper truth, perhaps.

When it comes to writing here, I do something similar, in a way. I generally don’t write about anything to personal. I kind of censor myself because this is a public forum. Anyone might read it, right? And yet, I know that even though I know that a lot of people who are close to me know that I write here, most of them don’t read it, which is fine. I don’t push it on people, really. It’s just here if anyone wants to read it. My boyfriend has never read it.

The thing is, if you read one of my scripts, or saw one of my films, I can tell you that that me in there. The whole thing is me. I wrote a horror script based on some stuff that happened to me growing up. I have moments when I send that script out, or when someone asks to read it when I know that they’re reading me. I have such a calm way of talking about my life and my past that people think that I’m not walking around with it everyday, like everybody else is.

So, when this beautiful girl I know says that she doesn’t know how I write, because she can’t put words on a page, I know that I partly find my voice in creativity, in writing things down that I cannot say. I know it’s partly just how I’m made. I like words. But also, I know that it’s hard to find your voice. How do you speak up when what you write about might make someone else feel small, or hurt? Or when your words might be used against you by someone you know, or some random person online who has issues that they can’t express in healthy ways?

How do you find that right tone, that’s informative and informal? How do you know that what you think is fascinating will be of any interest to anyone? How do you know what to say when no one has ever listened?

I don’t know, I can’t really answer all those questions yet. I guess sometimes you take a risk of just whispering into the void and seeing if anyone is out there, listening. Other times, you write out of that joy of having something you want to share or offer, a good story or an interesting theory about something, and you just need to post it or create it somehow, just for the joy of the thing.

It takes courage to reveal yourself, I think. More than people realise. Listening is the greatest gift you can give someone, I think. It’s love as a verb, even if you don’t like what they’re saying, maybe. Allowing someone the space to be heard, to admit themselves… It’s huge.

Either way, writing has always been the thing that helps me process everything. Ever since I was tiny and my grandmother have me a pen and paper, and told me that I could write something just as good as the stories that she wrote for my brother and I. There was a lot about growing up that was hard for me. I was a shy kid, but also a bit of a performer. I liked to put on plays, I was never nervous before ballet performances, I wanted to learn to sing, I loved costumes and clothes. I wanted life to be a glorious expression, but when it wasn’t, when I was shut down or pushed aside, writing got me through things. I have two boxes full of journals from over 15 years of scribbling. I did write about things I wanted to remember, things that made me laugh, that I wanted to remember, too.

I guess what I’m trying to say is that I’m still finding my voice, my public tone, or that balance between public and private. I struggle with feeling like what I write is good, or is valid or interesting as much as the next person, maybe more actually when I think about it. I struggle with revealing all of myself. I struggle with sending my scripts out, because they’re personal.

But I do it because I love it. It feeds my soul. It’s one of the things I have to offer. Words.