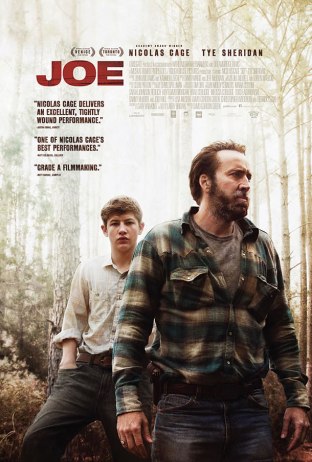 Logline: Joe is a man with a temper who keeps his life working on a delicate balance, which is threatened by being pulled into the life of a troubled youth.

Go see this movie. Even if it’s just to see Nic Cage do a performance that’s not a parody of himself.

I’m sure that Nicolas Cage’s restrained performance int his film will be the main talking point of this film, a return to the serious actor that we knew at the turn of the millennium, but there’s way more to it than that. At the moment, there are loads of films out there that, whilst entertaining, are comic books, teen flicks or contain giant lizards. I’m a fan of spectacle, but I realised how much I missed watching films for adults when I saw this film.

The stories based in the American South seem to really relish dipping into violence, depravity and poverty, set against a background of decaying grandeur. I really don’t know what about this appeals to me so much. Perhaps it’s the face of innocent surviving through all the darkness. That face of innocence is the teen Gary, played by Tye Sheridan, whose performance is subtle and endearing. His alcoholic father, who refuses to engage in a days hard work and who enjoys descending into violence at the drop of a hat is the flip side. And Joe is the good man with a bad temper, who tries to remain uninvolved, but can’t, as he sees a boy who wants to work hard and do well being pulled under by his father.

The characters are somewhat bleak and everything feels broken and dirty, but the performances are so natural it never descends into caricature. The plot isn’t obvious, and often takes turns you wouldn’t expect, which is also refreshing. OK, so this isn’t Sling Blade, and it’s not going to change your life, but it is one of the better films that I’ve seen, and not like a lot of what’s coming out of Hollywood lately. It’s a genuinely good film.

If you’re looking for a film for adults that makes you feel something, this might be your best bet.