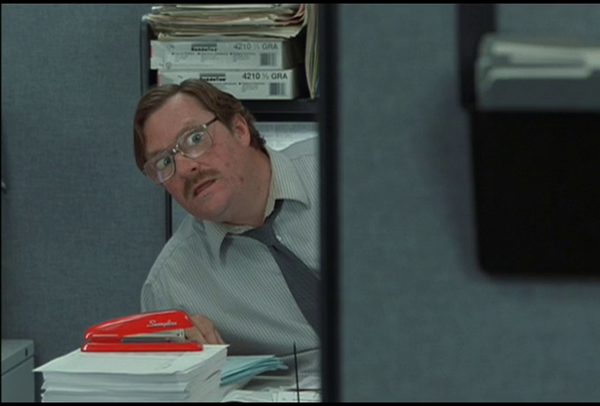 You might have noticed that I’ve been rather quiet in the last month. It was partly because August is Birthday Month, I have to admit, but it was also the month that I started a new job.

As the still above from Office Space (1999 dir. Mike Judge) would suggest, I am still in the office environment, and have a mild obsession over who keeps moving my stapler.

It’s made me think a lot about how your day job can effect your creativity. In my last role, I had some free time each day that I could devote to writing, which is my creative outlet, and I could write posts such as these as work as well, because my boss had nothing else for me to do. It’s nice to be able to say that your boss is paying you to write, isn’t it? But the results of that are low pay, and I think in most places most people who are at work are expected to be working.

When I was offered something with more pay, I leaped at it. If you you are aware of how high the rents are in London, you’ll understand why. But it makes me think, how do you balance the act of writing (or any other creative work), and paying the bills? This isn’t a new concept for me, of course. I worked through my film degree, and when I came over here to film school, I was working full time as well as taking a full load of classes at film school. It’s something tht I can feel proud of, for sure. I’m not afraid of a little hard work, but it does take it’s toll. And you have to make sure that that toll is not on your creative life.

Being at work and having loads to do has meant no time for writing blog posts.

However, the upside of your day job is the random things that happen there. In a past job, two little old ladies wound up in a punch up when one of them finally snapped at the other on her last day with the company. And in this job, there are some hilarious moments too, including a very surreal conversation about breast pumps at an office baby shower, which had me crying with laughter. My point is, sometimes fact is stranger than fiction, and your day job can give you little stories, characters or inspiration for your work.