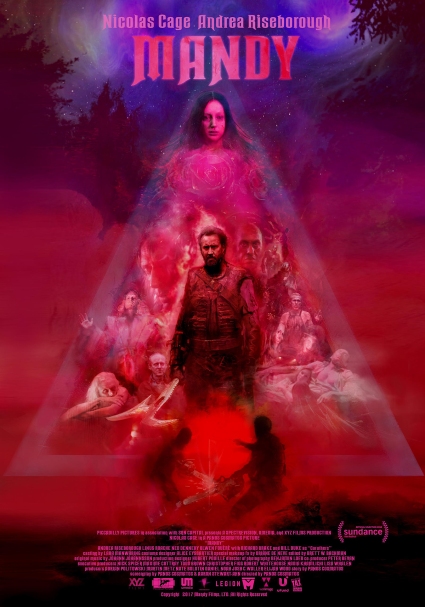 It’s 1983 and lumberjack Red (Cage) and his beloved wife Mandy (Riseborough) live in a cabin-like house in the forest, where she reads fantasy novels and creates artworks. When she’s seen by the leader of a religious cult, the couple are attacked, and a violent revenge is triggered.

Although this is a horror, to say it’s a slasher film or revenge film might be too simple. It’s a measured, nightmarish film, shot with imagery and coloured light that looks like the cover of 80’s pulp fiction. It’s in no rush to reach it’s conclusions but rather creates each scene as though exploring the imagery and emotions of each shot or scene. It feels like an art film, but the art it creates focuses on pop culture themes.

I normally don’t have a lot of patience for slow films, especially if they’re horror films, but something about this film I liked. It feels like a love letter, but I’m not sure what it’s a love letter to. Usually in a revenge film, the violent act comes early and the revenge is the main theme, but here it comes closer to the middle of the film, allowing a sense of foreboding to built.

For that reason, this film may be a bit too arty for a lot of people, and yet, it has some things that might make you want to give it a try. For a start, it has a great Nic Cage freak out, which in my books is always a good thing. It has inter-dimensional demons on moterbikes. It has an apocalyptic feel and hallucinatory imagery, which are pretty cool. And it has a final fight between two men with chainsaws.

It’s not for everyone, and takes a while to get going, but I think it’s a film that will find it’s audience and may just become a cult classic over time. I like that it doesn’t go down traditional genre routes, but creates it’s own thing. I think it’s a cool film, one that is best to just relax into and go with, let it take you to dark places.

See It If: you like 80’s pulp imagery, art house camera style, demons and violence. Not for everyone but something about it’s style I really liked.