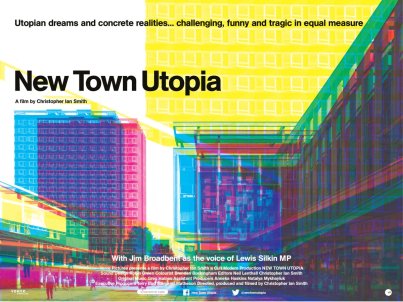 Originally written for and posted on We Make Movies

During the WW2, parts of Britain were shelled by enemy bombs and were in ruins, especially places like London’s East End, where factories were targeted. Urban planners wanted to create places that people could live that would evoke a sense of community and civic pride for the people who would move there. Basildon in Essex was born.

There were some lifestyle clashes as city dwellers moved into an area where country people had lived, and compulsory purchases of land was made. But, initially at least, people who had lived in slums in the city, suddenly had homes that were modest, but felt like luxury with their gardens and larger space. It was a dream. A new town that would be designed from scratch, avoiding all the problems that older cities in the United Kingdom had. A utopia.

So how did an urban planners dream become a place known for being rough and demoralising?

This documentary from Christopher Ian Smith explores the dream that was, the place that was created from that dream, and it’s steady decline. It’s a film about the way that government enterprises often don’t take in the reality of humanity, looking down from a height and choosing for the working classes what will make their lives better, without really getting to know them. And it’s a film that shows the real people of Basildon, undermining to some extent the poor reputation that the city has, and exploring the stories of the people who live there.

The film uses shots of the urban environment of the city, taking in the landscape often as separate of people. Close shots on details, wide shots on urban landscaping devoid of people, or with people depersonalised by their head or face being out of shot, unseen. This is juxtaposed with head on interviews with people who live in the city, who grew up there and are proud of the cultural heritage of a place that has been home to the working class and a host of creative people who still live and work there. It’s a film that explores honestly, and takes the good with the bad, showing different sides of the place, it’s many faces. It has a coherent narrative, but allows you to make your own mind up about what it’s messages might be.

Personally, I found the historical aspect really interesting. The focus on architecture and building was so fascinating. The idea that someone could build a place that would make people feel at home, encourage community and civic pride is a really beautiful thought. Ideas like having a lot of green spaces and access to public amenities like art centres and sports equipment seem like wonderful ideas, and lead some people to choose careers other than working in factories or taking on traditional working lives. It felt like people wanted to do something good for each other after surviving the war together. And the stories of some residents who talk about how it felt to move into a home with a garden and a bathroom for the first time is really moving.

And yet, there’s a cautionary tale here too. Because Basildon is not Utopia. In fact, it’s a picture of dystopia. Even in the early days crack were showing. A city built with workers in mind thought of jobs and amenities for men, and none for women, and valium was widely prescribed. Homes were built as estates, and often were isolating or looked like prisons. Poorly executed work on housing meant disintegration, heating was installed in ceilings instead of floors, alleyways that were perfect for drug dealers and small time violence, gardens were designed to be uniform and weren’t allowed to be cultivated or changed by residents. Decay set in. With no work other than factory and industrial jobs, there was little way out and estates were often thought out with design over function and could be isolating. It was a place that was a dream of one man but that failed when designed by committee and corporation.

Out of the people that moved here with hopeful faces, came a generation of children who had less hope, less opportunities. Some moved away, others struggled to find work, some found a home in the cultural and arts centres and created political statements and change through movements like punk or socialism. Synth bands like Depeche Mode were born and flourished there, but many also felt hopeless and stuck and turned to alcoholism and drugs. The dream of the 1950’s, of a better and safer world, of people living in community and having a better life became something much darker. As one interviewee describes it, it’s “like East Germany in the 60’s: barren, hopeless.” This film is the story of the way that a Utopia can fail, and the reasons why Basildon in Essex has become the place it is, a strange mix of architecture and design and failure. Fascinating and moving, both historical and personal, it gives a voice to the disenfranchised and gives us a glimpse of the creativity that still lives under the gritty surface of a dying town.