Created by Sam Raimi in the early 80’s, this franchise stars Bruce Campbell as Ash Williams, a young man who gets mixed up with a cabin in the woods and an ancient book which unleashes unspeakable evil. Campbells camp turn made him a B movie star, and the franchise has been a cult favourite for a long time, with it’s daring gore, special effects and creative camera work.

Sam Raimi’s film that that started them all… And actually quite ground breaking at the time. It’s quite schlocky now, and the gory elements have dated, which is the best part, as far as I’m concerned. It’s all about a group of teenagers who head out on a weekend away together to a cabin in the woods, and find a book in the basement, unwittingly releasing ancient evil which possesses them and it all gets rather crazy. Bruce Campbell as Ash is a winner, with his comically terrified face and his ability to survive, whilst being laughed at manically by the demons possessing his fiance and best friends. It feels like all the actors in this film have a really good time chewing up the scenery.

Very dreamlike, this film starts with Ash and his girlfriend heading to the cabin, where he listens to the tape of the evil Sumerian text, and all hell breaks loose. After dismembering and burying his girlfriends corpse, he is joined at the cabin by the daughter of the cabin owners, her boyfriend, and a local couple who guided them there. Things only get worse, but the daughter manages to read passages from the text that open a time loop that can get rid of the ancient evil. Sadly, Ash is pulled in with it, and finds himself stranded in ancient times. The films long opening sequence involves Ash going nuts and being tortured by the evil entity, and it’s quite a random, eccentric watch. This is the film in which Ash’s hand gets infected and he has to cut it off with a chainsaw, later leading him to create a holster to substitute the missing hand with said chainsaw. It’s a wonderful, random, nightmarish, bloody film. With 80’s hair. 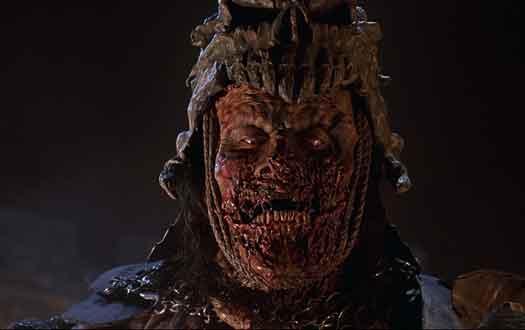 This time around, the story is even more comical, and Ash finds himself in a time of knights and damsels, where the land is plagued by Deadites, and only he can stop them. He has to travel to get the book, deliver the cheesiest one liners known to man, unwittingly unleash an army of the dead, and fight both stop motion and puppet evil. It’s a less gory film, and with a lot more one liners. Ash as a character is a lot more confident here, attacking the bad guy, rather than being limited to being tortured by it and fighting for survival, though there’s that too. It’s a really odd film, but actually quite well paced and entertaining.

In this remake, the plot is basically the same, but with a modern, more slick effect. The shots are really nice and eery, and the deaths are more seriously, frighteningly gorey rather than comedic. It has less focus on the taunting, laughing possessed, and more on the deaths, and plenty of little homages to the original film. However, though it’s a slick and fairly entertaining and chilling horror, it suffers from the cliche character stupidity, which kind of slows the whole thing down. Still, a fairly solid film in all.

In this comedy, directed by Bruce Cambell, the actor Bruce Campbell is mistaken for the character he plays, Ash in the Evil Dead, and is called upon to fight real evil in Oregon.

A short film in which Freddy Kruger and Jason Voorhees team up to make Ash’s life hell, all rather silly, but why not? Not starring Bruce Campbell. 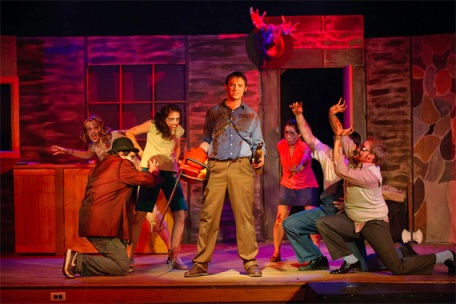 OK so I’m cheating a bit by including this one, since it’s a stage play musical, but it felt wrong not to mention it. Critically acclaimed, and likened to the Rocky Horror Picture Show, this adaption is rather funny and tongue in cheek, involving plot points from the first trilogy, but allowing changes to fit in songs and dancing.

This series of 30 minute episodes has received high acclaim from fans, and stars Campbell as Ash, a man who has never come to terms with the tragic events in his past, and is living in a trailer, when a Deadite plague breaks out. He may be the only man who can save the world, and perhaps come to terms with the past at the same time. Renewed for a second series.