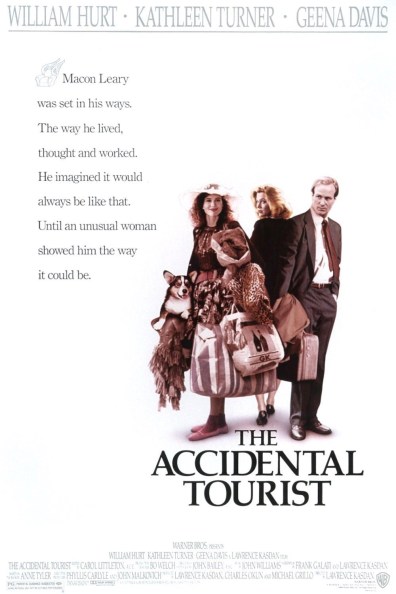 Macon (Hurt) is a travel writer. He writes books about where to go and how to travel seamlessly. But one day he comes home to find that his wife (Turner) wants a divorce, because she is not coping with the death of their son a year earlier. She moves out and leaves Macon alone in their house, with their dog. A bright woman at the boarding kennels (Davis) takes a shine to Macon, and in her determination to get through to him, she takes on training the dog when he exhibits behavioral problems.

Macon and his eccentric family are very set in their ways. Macon appears to not be able to really engage with life or his feelings, or to take action. He’s stumbling through life. Though the dog trainer is very sweet, he finds it hard to really open up to her.

Why Is It A Must See: Very touching and oftentimes hilarious, the film is based on the Pulitzer prize winning novel by Anne Tyler. It captures so well the way in which we can go through the motions of life but not be living, or be in a crowded room but still feel alone. The film is often funny, sweet, and eccentric, but it’s manages to get across that the main character is in trouble, that he has turned to ice, and that in the form of the dog trainer and her son, he can find his feelings again, if he can take control and choose to. It’s beautiful.

See It If: you love dogs, eccentric families, or a good drama film. This film is both cheerful and heart-felt.